Benoit Cheese is open 9am -5pm Monday - Friday and 9am-3pm on Saturdays only.

Benoit Cheese Haus is a cheese lovers' dream come true! We are an old fashioned specialty retail cheese shop that carries Wisconsin's finest cheese. And the best part is, you can sample them! We are a destination for friends, co-workers, your significant other or a family day out! You can get a taste of all over Wisconsiin under 1 roof. So if you have a favorite cheese, stop in! We more than likely have it or we will try to get it for you! Benoit Cheese Haus is a country destination!
This store has been open with its current mission statement since early 1973! A place where customers could come in for great service and great cheese. Today, the store has expanded to include over 150 varieties of cheeses, fresh-cut to order and prepackaged. We carry everything from FRESH CURDS to 16 year-old Cheddar! We also have a wonderful variety of locally made items, such as: honey, syrups, specialty meats, soaps, candles, knick-knacks, wine and organic oils. We offer made-to-order cheese trays and gift boxes. Call or order online. WE SHIP IN US ONLY. Come sample some great cheese!!
Monday - Saturday, 9am-5pm 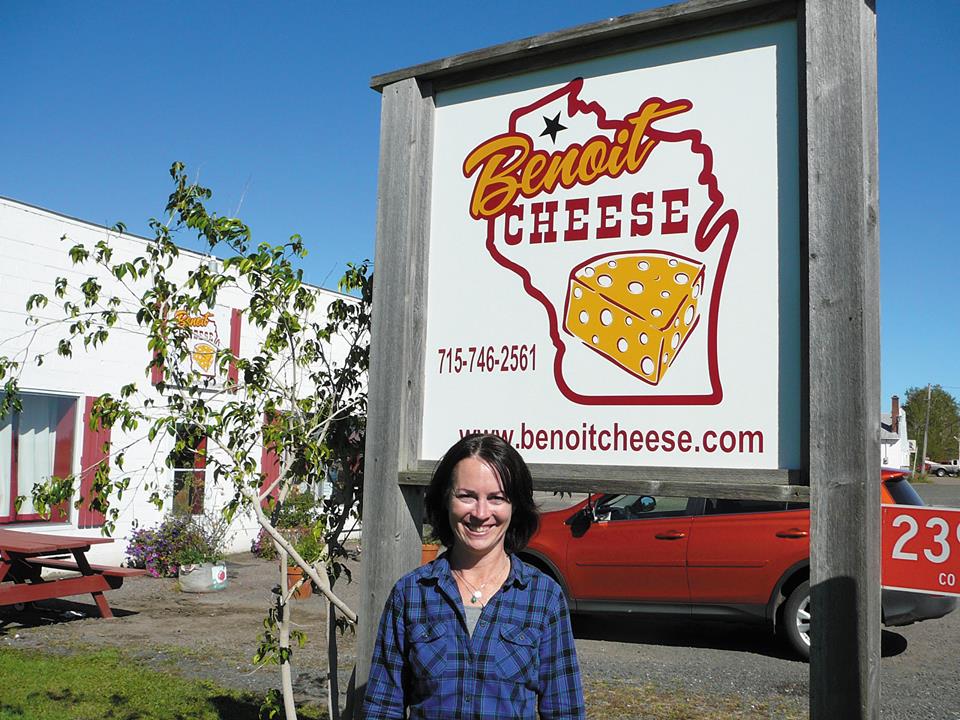 Six years ago this month, “Benoit Cheese” started doing business in downtown Benoit, and ever since then, Jill Jones has worked there as the sales manager, and later as the general manager.

Owned by local dairy farmers, Benoit Cheese was housed, and still is, in the Benoit Reload & Livestock building at 23920 County Highway F, a mile west of Hwy. 63 next to The Avalon. You can’t miss it.

What changed on October 1, however, is that Jones finalized her purchase of the business, building, and property, and is now the sole owner of the newly named Benoit Cheese Haus.

During a recent interview with Bottom Line News & Views, Jones said she’s changing the name slightly for several reasons. First, it’s important to clarify that the Benoit Cheese Haus is an old-fashioned specialty cheese store that sells a wide variety of the best Wisconsin-made cheeses. They do not make cheese as the former name led some customers to believe.

Secondly, she is mostly German, so the word haus (which means house) matches her ethnic background, and better describes the business when combined with the original name.

She also noted that the word Benoit, in French, means blessed, and that’s exactly how she feels about her new business, staff, and loyal customers. The closing of the G & M Country Store in Benoit at, coincidentally, the time of her purchase could also be viewed as a blessing as Jones begins to make her own imprint on the operation.

There’s more to the Benoit Cheese Haus than just cheese, though. Customers can purchase bread, eggs, milk & ice cream (from Tetzner’s), sausages, chicken, hamburger, bacon, and a whole lot more including gifts and souvenirs. Over half of what the store sells comes from local sources.

The cheese alone is worth the stop, Jones said, because they offer 150 varieties from 16 year old cheddar to fresh, squeaky curds.

The Benoit Cheese Haus goes out into the community, as well, selling their products at area festivals, events, fundraisers, holiday shows, and to other businesses seeking high quality cheese.

They also give back to the communities they serve by supporting area organizations such as WITC, Big Top Chautauqua, 4-H, area schools, and the Furball fundraiser for the Chequamegon Humane Association, to name a few.

According to Jones, the store has a steady stream of customers most of the year, especially in the summer when tourists are in abundance. It slows down in the first quarter, as do many other businesses in the area, but loyal local customers keep the doors open all year. To accommodate them, Jones said, the Benoit Cheese Haus is open year-round Monday through Saturday from 9 to 5, which allows those who can’t make it during the week to shop on Saturday.

Jones wants shoppers to know, too, that if they want or need a specific item, all they need to do is ask for it. Many items on sale at the store are the result of customer requests, and are invaluable in helping Jones and the staff to meet the needs of their clientele.

According to Jones, the months ahead will be busy ones while she replaces the logo on stationery, shirts, signs, labels, advertising, and all other promotional materials. She also plans incremental improvements to the building and store on a priority basis, and plans to enlarge the retail shop sometime next year.

With the busy holiday season coming, some of that will be put on the back burner for the rest of this year, but will be front and center in 2017 as she ramps up to make the Benoit Cheese Haus an even better destination stop.

“We ship all over the United States,” Jones said, noting that orders can be placed a multitude of ways.

For more information or to place an order, visit the Benoit Cheese Haus online at www.BenoitCheese.com, call them at 715-746-2561 or email them at This email address is being protected from spambots. You need JavaScript enabled to view it., like them on Facebook at BenoitCheese.com for the latest updates and specials.

Benoit Cheese is located at 23920 County Highway F. Ashland, is open from 9 a.m. to 5 p.m. Monday through Saturday and can accommodate multiple RVs and buses.